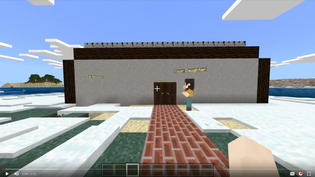 Welcome to our website for the game, 5 Floors of Retirement. Here you will find everything you need to know about the game, including functions, hidden components, and the thematic core of each level. The game has five levels, some demanding several tasks, others filled with dialogue and character-driven. It is set in a retirement home named Snowy Peaks in which commonplace dehumanization is amplified. The player exists in mental purgatory, reflecting on their time spent here.

The player begins outside Snowy Peaks and speaks to their daughter before entering the building. Once they enter, they will find themselves in the main lobby, which doubles as Level 0. They will be introduced to the receptionists and the doctor. After speaking to them, they may enter the “Visitor Center” door. Once they reach it, they will be dropped into Level 1. 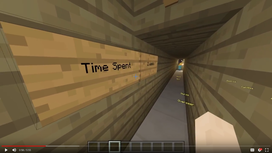 Level 1 begins with a tight, claustrophobia-inducing hallway. As the player advances, they realize they are lost in a maze and will attempt to find different versions of their daughter to ground them in reality. The passages in the hallway parallel the passage of time, and each conversation the player has daughter is accompanied with a sign which indicates the time passed since they first enter the retirement home. Lost somewhere in this maze is the truth behind the player’s move from his daughter’s home to the retirement home. Once this is found, they will see a set of stairs which lead to the next level. Near it, a sign can be found which says “You miss your daughter, and begin to see her in everyone…”. 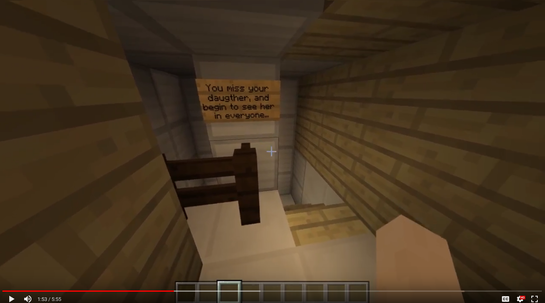 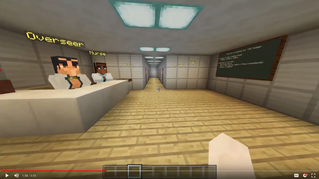 On Level 2, the player will realize the door to the next level is locked. They should talk to the workers behind the desk in order to determine their course of action. This level contains both a lobby and the living quarters for many of the guests at Snowy Peaks. These guests seem frustrated, as this is the expected visitation living floor and they have no visitors. Here, the player will find the meal of the day and the activities for the patients. The player’s task is to bring a note that a patient received from their son to the overseer. Once this is completed, the unenthusiastic nurse will give them a pen and paper to write a note to their daughter, as well as a key which unlocks the door to Level 3. 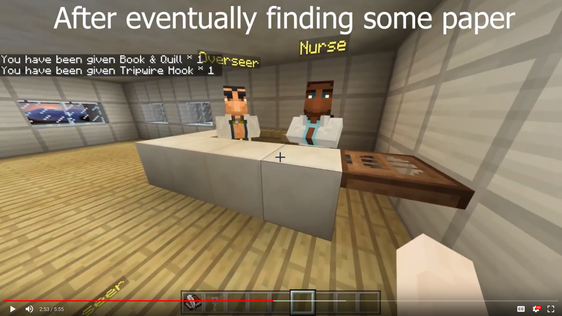 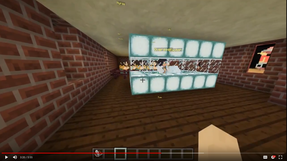 Level 3 is the bingo room and functions a bit differently than the other levels. This floor is rather jarring, the overseer and doctor are segregated in a glowing glass box and locked behind a fence are the player’s housemates. They all look like the player’s daughter, a symptom of the player’s desire to see her once again, and a fulfillment of Level 1’s conclusion. There are no mandatory tasks on this floor, however the player may learn a few secrets about Snowy Peaks by talking to the residents. There is, for example, a secret passage on this floor. The player can choose to search for this, or simply proceed to the next level. 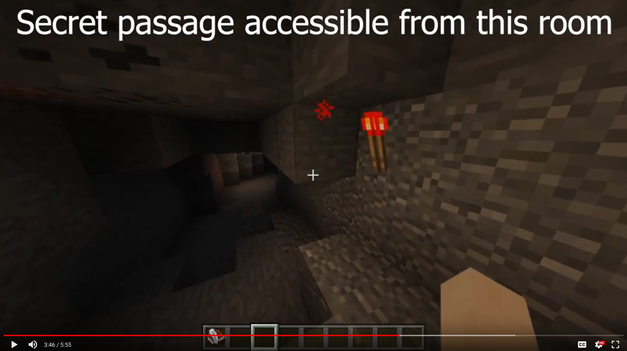 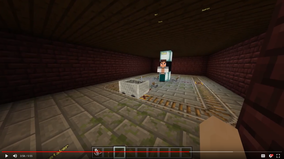 Level 4 contains a set of railroad tracks with a minecart on it, however the minecart is not moving. The player’s goal is to get the minecart to move. They should talk to Tom to see how they might do so. After the minecart is continuously moving, the player may progress to Level 5. 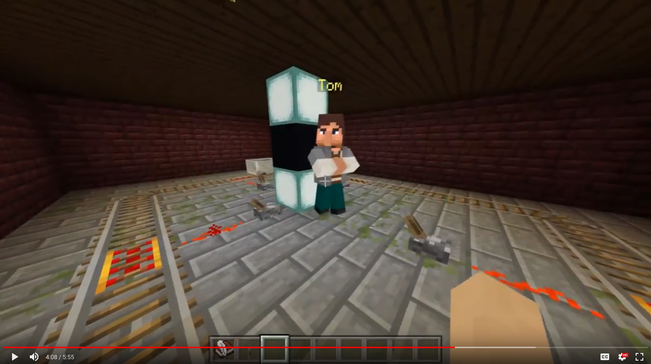 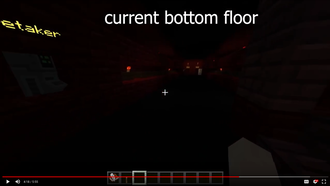 Level 5 is dark and obscure. The player will see the caretaker and should talk to them in order to learn the contents of this room. This is the final floor of the game and it heavily emphasizes player-choice. The walls are lined with coffins and dimly-lit torches, a reminder of the player’s eminent mortality. As the player progresses, they will inevitably run into two levers. One suggests “A cold an uncertain future”, the other suggests “A better future”. It sounds like an obvious choice… but is it? There is an objective to this floor, and it doubles as the conclusion-paragraph of the game. The player must pick the correct option in order to complete 5 Levels of Retirement. If the wrong path is chosen, the cycle repeats. The player should use their wits in order to figure out how to break the cycle and finish the game. Once the correct path is chosen,  they are led down a lighted path towards a peaceful rest.
This game was inspired by the way the elderly gets treated in many retirement homes and how that goes unnoticed to the outside world. The game is trying to spread this message to the outside world and how a change should be made to this continuing cycle. There are many examples given in this game that show the two different perspectives of the retirement home. One is the elderly man and the other is his daughter. Level one depicts these two different perspectives perfectly. The man does not want to be in a maze and his daughter tries to force him to believe that the retirement home is the best thing for him.

The message that the elderly is treated bad in retirement homes is also depicted very well in level 2 and level 5. For example, the first reference to the bad treatment of the elderly is when the man must take the note that another patient received from his son away from the patient and take it to the overseer. This relates to the real life aspect of retirement homes taking notes from the elderly that they receive from their family and throwing them away. This is a real thing that happens in some retirement homes and needs to be adjusted. The other example is in level 5 where the elderly man walks into the dark coffin room and the Caretaker tells the man that every one in the retirement home will end up there eventually. This reflects the bad treatment as well because it is not a Caretaker's responsibility to say anything negative to a patient whatsoever. The caretaker is supposed to make the patient feel as comfortable as possible before he/she departs this world.

Overall, the big message that this game is trying to get across is that ensure that your loved ones are being taken care of wherever you decide to put them. Do your homework on the retirement home and see for yourself if the place is somewhere you feel comfortable deporting your loved one. You should follow the rule of thumb that states, "If you would not live there, do not make anybody else live there." This will eliminate a lot of the problems in the retirement home industry.